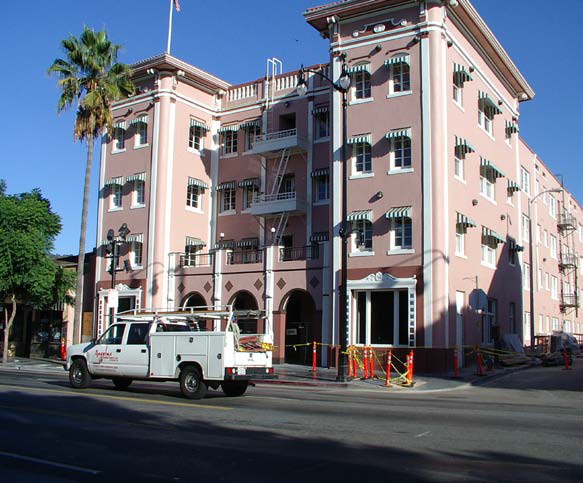 Historic Hillview Apartments were last occupied in 1994. City officials had declared the building unsafe after the Northridge Earthquake, damage from a sinkhole caused during nearby subway construction and an arson fire that greatly damaged the top floor and roof of the building.

The four-story Hillview apartments is said to be the oldest apartment building on Hollywood Boulevard. The complex was built in 1917 by movie mogul’s Jesse L. Lasky and his brother-inlaw Samuel Goldwyn to house the many stars of Hollywood through the years. The “Hillview” housed according to director Douglas Carlton “everybody that was anybody”. Famous tenants include: Charlie Chaplin, Stan Laurel, Mae Busch and Viola Dana.

The 54 unit “Mediterranean Style” apartment building was restored to its 1917 glory. Southland HVAC & Construction renovated the HVAC and kitchen exhaust system throughout the building. All sheet metal ducting and Stainless Steel venting hoods for the Bistro were self fabricated and delivered to the project.

Due to the historic nature of this property the project was most challenging and rewarding when working with the guidelines authored by the Heritage Hollywood Foundation.